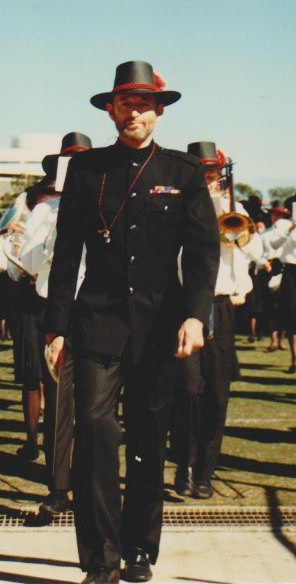 Mr Eric Cooper, the conductor of the band, has established a well deserved reputation as possibly the leading conductor of junior brass and concert bands within the state.

Born in Bristol, England, he studied the trumpet for a year before enlisting in the Worcestershire Regiment as a boy musician at 16 years of age. He became principal trumpet at 19 and was given accelerated promotion. He served in the British Army of the Rhine for seven years, with periods in Malaya, the Caribbean and Gibraltar. Attaining the rank of warrant officer, he was selected in 1966 for two consecutive secondments to the Sultan of Brunei’s Armed Forces. His services, particularly involving public relations duties and the administration of the band during tours to the UK and Australia, were recognised by the State of Brunei with the award, Pekerma Setia Negara Brunei. Retiring from the British Army in 1972, Mr Cooper settled in Perth and was employed by the Education Department as a teacher of brass instruments. He played trumpet with the WA Arts Orchestra for two years before concentrating on local and school concert bands. In 1985 he was nominated for the Director-General of Education’s Award of Merit for the high standard of music provided by the Combined Primary Schools Concert Band. After 13 years with the Education Department, he retired in 1987 to continue his musical activities in the private sector. In 1988, he was nominated for the citizen of the year awards, for his contribution to the musical experience and training of young Western Australians since 1983.

Some of Mr Cooper’s success in preparing bands for competition is due to the effort he devotes to each band with which he is associated. While he expects that each band member is fully committed to the band, he is in fact asking no more than he himself gives. Countless hours are spent by Mr Cooper, in selecting and preparing the musical arrangements used by the band to suit the mix of instruments and capabilities of the various players within the band. At each competition, the band is assessed on the performance it gave on the day, but the conductor is assessed on his performance during the rehearsals which preceded the competition, as it is these which determine the band’s performance at the competition; it is fair to say that Mr Cooper has performed well, as demonstrated by the results which he achieves.