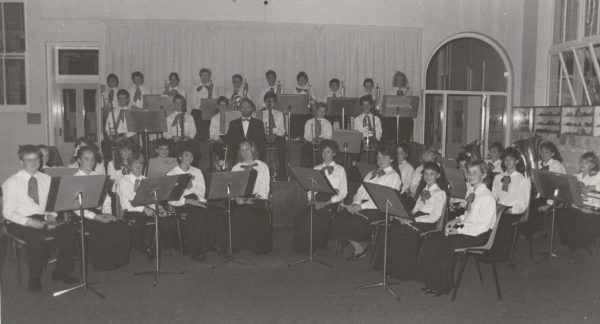 The Northern Districts Concert Band was formed on March 30, 1987. Six rehearsals after it commenced, junior members of the band competed at the 1987 Band Spectacular, and won both the musical and entertainment trophies for the best junior band. Early in November, 1987, junior members competed in the State Band Championships and won the junior concert band section of this competition. In March, 1988, the band again won the entertainment trophy for the best junior concert band at the 1988 Band Spectacular. At the State Band Championships, in June, 1988, the band again won the junior concert band section of the competition.

Other engagements have included performances at the Royal Show, the Wanneroo Arts Festival, a Christmas concert at the Pagoda Ballrooms, public concerts for the Perth Theatre Trust at both the Perth Cultural Centre and the Hole in the Wall Theatre, a performance before the Governor at the opening of the new Mount Flora Regional Museum in North Beach, a set of 6 concerts over the 1988 Easter holiday period at Karrinyup Shopping Centre, and a performance in the Courtyard Music programme at the Fremantle Arts Centre. The programme for these performances usually consists of up to 90 minutes of light, bright, varied musical entertainment, broken by a 10 minute interval.

As with most organisations, there are many expenses involved in establishing and running such a band, ranging from the purchase of music scores to equipping the band with music stands. The band was fortunate in attracting the sponsorship of Axis Computer Services in 1987, and again in 1988, and are grateful for the financial assistance which this firm has kindly provided, which has supplemented the fees paid by members, and receipts from playing engagements.

Rehearsal facilities are very kindly provided for the band by the Principal and Staff of West Leederville Primary School, where the band practises  together each week.

In June, 1988, the band was fortunate to receive a grant from the Queen Elizabeth II Silver Jubilee Trust for Young Australians. This award has enabled it to strengthen its percussion section, through the purchase of a set of timpani, much to the delight of those band members selected to play them. The band is grateful to the Trust for this support.

Many of the band’s original members received their initial musical training within the final two years of primary school. Selected for their keenness and potential ability, in year 7 they had been invited to join the Combined Primary Schools Concert Band, conducted by Mr Eric Cooper, and ably assisted by Mrs Sally Wheildon. This band, with an entirely new membership each year, was a major force among the junior concert bands of the day, winning almost all competitions in which it competed, over a period of 3-4 years. At the end of each year, the members of the band dispersed as they entered various high schools around the metropolitan area.

On being requested to form the Northern Districts Concert Band, Mr Cooper invited a number of the members of the 1986 Combined Primary Schools Concert Band to join him in this new venture. Members of previous Combined Primary Schools Concert Bands were gradually attracted, together with other instrumentalists from government and private schools throughout the metropolitan area. Currently, the band membership stands at 50 players, with ages ranging from 11 to 17, and an average age of around 14.

While band membership is very demanding of the players, it can also be very satisfying. A considerable proportion of the players belong not only to the Northern Districts Concert Band, but also play in other concert and brass bands throughout the metropolitan area, with some playing in up to 4 different bands. The players has also formed close friendships with others in the band, and obtain considerable satisfaction from the achievements of the band, and from their social interaction with other players.

Each instrument in the band plays a unique and necessary part in the musical arrangements which are played, and if the band is to perform at a satisfactory level, the individual player must be prepared to rehearse regularly with the other band members. Nor is it simply a matter of playing the correct notes which appear in the sheets of music; interpretation and timing must be rehearsed until each member can perform his or her part satisfactorily. Absolute obedience to the conductor’s directions is essential if the music from the individual players is to be melded into the unified harmony of a full concert band.

Performances before the public, whether fee paying or charitable, play a large role in preparing the band for competition. These provide a sense of purpose for the band, and provide encouragement to the players which assists them in maintaining enthusiasm throughout the months of rehearsal. When engagements generate a fee, additional resources become available to the band, which add to the band’s performance.